As the world becomes mired in increasingly inane and preposterous conspiracy theories, I thought it would be interesting to investigate the following research question in 2020: What predicts conspiracism in healthy adults of the general population in Western cultures and how do they think (reason) and behave? The result of my research was summarised in five diagrams. This is number three.

An individual’s existing belief mechanisms can affect how likely they are to take up conspiracy theories. Research shows two mechanisms at play. Unsurprisingly, a conspiracy-prone personality, where an individual harbours unreasonable distrust for systems, holds unquestioned and unwavering loyalty to a group, and exhibits a tendency to see the presences of conspiracies makes that individual more likely to take up new conspiracies. The belief in non-fact-based concepts like pseudoscience and the paranormal also predicts an individual’s uptake of conspiracies.

Example: “COVID vaccines are a way for the dark state to track us.”

A conspiracy-prone personality and belief in epistemologically-unwarranted concepts: “The dark state exists, it is run by lizard aliens intent on curbing the world population. Vaccines are made of toxic metals. Bill Gates wants to implant us with tracking things. 5G signals create the COVD virus from inside our bodies. There are secret tunnels under the US Capitol where children are trafficked. Jesus is white, loves guns, and is into user-paid healthcare. Drinking cold water during a meal can cause the food in your stomach to congeal. Apple cider vinegar can neutralise the ‘chemtrails’ spread by jet planes.”

The diagram shows the cognitive foundations behind these two conditions. Enlargements shown below. 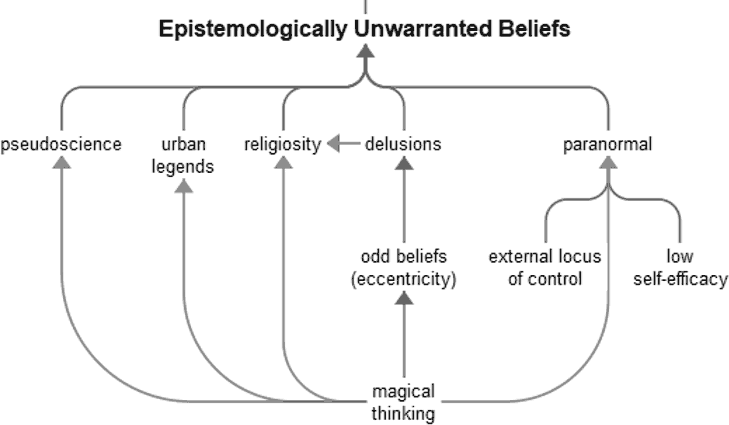