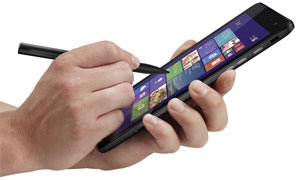 After several months of struggling through growing disappointments with a brand new Dell Venue 8 Pro tablet, I finally returned it (with some relief) after it yet again refused to wake/start up. Good bloody riddance.

The purchase started promising enough. The reviews were great. The specs reviewed were great. And the price was great. For $298 it even had active stylus support. This was the clincher. Or so I thought.

When I got to the shop, I discovered that there was now an updated model of the tablet. Same price, same specs except for half the RAM and half the storage.

Windows 8.1 was supposed to run fine with just 1gb of RAM. OK, fine I'll get a 64gb micro SD card. As long as i still have active stylus support - the must-have. The salesperson said everything was otherwise unchanged. There was no useful information on the box.

The Dell website was clear as mud. The was the Venue 8 (running Android), the Venue 8 Pro (running Windows 8.1 with active pen support) and something called the New Venue 8 Pro with less RAM and less storage but otherwise the same as the not New. Stupid naming much? Are we running out of words in the English language?

Nevertheless the tablet was very nicely built. Quality feel. Nice premium heft and materials. Perfect form factor for use as a notepad or sketchpad. Especially when I order the active stylus from Dell.

Windows 8.1 worked surprisingly well. Hats off to the developers and designers at Microsoft. I can believe this really was the best possible outcome of an otherwise flawed hybrid-UI approach. I can now see how this would unfortunately greatly confuse desktop users.

After ordering and waiting for the active stylus to arrive weeks later (direct from Dell) I couldn't get it to work!

It’s a lovely piece of kit the Dell Active Stylus. Solid premium material. Good heft. If only it worked! Searching for drivers and fixes yielded nothing. A short request went in to Dell. They offered to replace the “faulty” pen.

Just as i was packing it up I found an obscure reference on a forum that mentioned the existence of three different models of the Venue 8 Pro. Same bloody nma. With slight differences in RAM and storage. And: the newest low end model no longer has active stylus support!

Stupid move to drop a key differentiating feature from just one of these models, and not mentioning it clearly on the box or on the website.

And the utter failure to clearly communicate product differences and changes; especially during the product transition in the shops.

I raised a refund request for the stylus. Because the stylus was probably working; just never ever with the particular model of the tablet I had! &#%@$#!!

I decided to persevere with the tablet. It has already been set up. It is now imbued with expectations. It is already becoming a part of my working process. So I got a capacitative stylus instead - the Adonit Jot Pro. Another nice piece of kit. But nowhere near a match for the precision and usability of an active stylus.

The tablet did not charge consistently.

Oh it would appear to be charging. The right LED and on-screen indicators light up when plugged in. Sometimes it wouldn't wake up in the morning; necessitating pressing various buttons 20-50 times to rectify. Other times it would behave perfectly. Yet other times it would wake up with a bizarrely flashing/strobing screen. In other words, it was totally unreliable. Imagine that, a “Pro” device that cannot be actually used for work.

It also appeared to requir the use of its own Dell-branded charger and cable to charge reliably. I couldn’t use other, similarly rated, chargers or cables. This restricted the tablet’s versatility as a travel companion. I do not need to have to pack one specific charger and cable just to support this one device.

When I returned the tablet the salesperson said many of these units have come back with similar not-waking-from-sleep problems. Engineering fail.

Windows 8.1 is not quite ready for 100% touchscreen use. Not Dell’s fault. But nonetheless contributed to the overall bleargh of the product.

The on-screen keyboard never worked well enough. more often than not it just got in the way. There was no real predictive text - other than a laughably rudimentary spelling-based preemptive guessing mechanism, rather than the more sophisticated pattern- and context-based predictive mechanism. Even this function is only available on some or one of the many different onscreen keyboard combinations. Several from Windows, and one from Dell. Each had their own pros and cons; all lacklustre.

Controls to copy/cut/paste did not reliable appear after selecting text. More often than not, I found myself selecting a piece of text and then at a loss at what I could do next.

Sharing stuff is forced through the Windows Mail app. Instead of sharing the all important URL, Windows would share a screengrab. Which genius thought that was the most useful option to implement?! So to share anything meant I had to select some text and … oh wait… where’s the damned Copy button? &#%@$#!!

For now I know Android on my Note 3 phone works, and Windows on a laptop works. If I do ever get a tablet for work in the near term it will be one of the Galaxy Notes with an active stylus; like the phone only bigger. I’ll avoid the Dell tablets for now, Pro or not Pro.

Windows 10 will hopefully work better. The Toshiba Encore 2 Write currently looks like a strong contender it if ever came to Australia.