No peri-peri on premises… 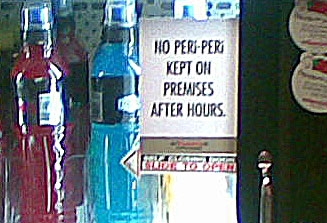 Spotted on the fridge at my local Nando's charcoal chicken shop. It took me a split second to get what was on the sticker - it was a great bit of entertainment whilst I was waiting for my food.

The sticker was discreet; almost like an after thought. It is part of the integrated Nando's branding/advertising approach which I reckon works quite well. Their recent ad was also a clear departure from other chicken shops. Instead of listing products and price (quarter chicken and chips for only $4.99), the Nando's ad showed a stripper who was addicted to Nando's who had to have a peri-peri patch to get by until her next Nando's fix (with her family). And of course, we were also told the patches were NOT available anywhere.

Filed under: Communications, Differentiation
Subscribe to my RSS feed