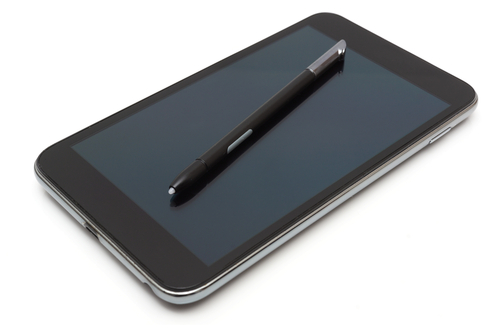 Earlier this year, I found myself at a meeting on the other side of the planet (deliberately) without my laptop.

I used my phone to take notes, draw diagrams to explain concepts, write up my thoughts and share the results afterwards.

It does work! The phone effectively replicated my usual process of taking notes on paper or a whiteboard, followed by a tidy-up in Visi or Freemind, before sharing via PDFs.

I've been looking for a practicable replacement for pen and paper for many years now, including using a convertible tablet PC (underpowered heavy and expensive). I think I have finally found the perfect combination of functionality and portability.

I used the Papyrus app. Mainly because it offers an infinite page size compared to the Samsung S-Note app. Papyrus also outputs vectors to PDF. Whereas the S-Note outputs bitmapped PDFs or PNG files.

When taking notes I only use one pen size and colour. I didn't use any of the shape tools.

Panning and zooming was easy. With the infinite page size, I can work with each page as a whiteboard, panning to a new blank spot, or adding a new page as needed.

I thought the lack of handwriting conversation to text would be a limitation. But it actually works well to just focus on taking notes and talking; and not fiddling with the transformations.

The small S-pen is a tad fiddly for my large hands. I kept hitting the side button on the pen while trying trying to get a good grip. I am learning to avoid the side button. Or I could get a larger replacement pen. (The pen from my warm tablet does not work with the Note 3.)

Sharing notes and sketches on the screen works for a small group of 2-3 people. I found myself naturally turning the phone around to show what's on the screen just as I would do with a piece of paper.

If i were working with a larger groups I would want to share my screen on TV or projector. I must admit I would still prefer an actual whiteboard in that case, and capture the results using the phone camera.

Tidying up and exporting notes

I did find myself rewriting some of the notes for legibility. And tidying up some of the diagrams. Just like I would in Visio.

I did need to resize some of the notes.
The zooming in and out while note taking resulted in material being created at different sizes. One thing to remember to to is the two-finger double-tap to reset the zoom to 100%.

At this stage, the option to transform handwriting to text could be useful. Or it could result in lots of rewriting and editing. But since the Papyrus app does not provide this functionality I could not test it. (Retyping and repositioning blocks of text is clumsy.)

I can of course take all the notes into Visio as I did with paper based notes.

When tidying up post-meeting I do use a secondary pen colour to group material. It would be useful for the app to support at least two preset pen styles (nib size and colour.)

The final step was to export as PDF files and email them off to my colleagues. Job done.

One of my original intentions with my tablet PC has now been realised in the far more portable form of a Galaxy Note 3.

How do you use technology in meetings to capture, clarify, collate and share notes?

Is there a better way to do it now than when you first started working?

When was the last time you tried working differently?

Image: Phone with stylus via Shutterstock.

Filed under: Technology, Work Life
Subscribe to my RSS feed