The Cycle of Abuse in the workplace 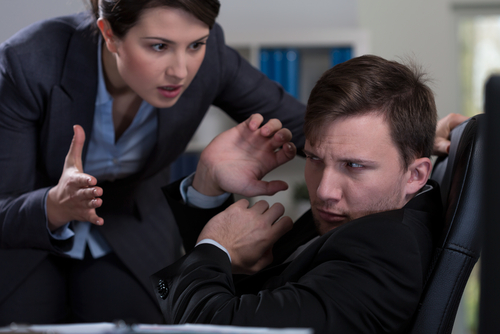 Abuse in the workplace cost businesses money. Lots of money. And it can happen to anyone regardless of age, gender, ethnicity, or position in their organisation.

Where there is abuse, there is fear. And with fear come division and inequality. The presence of abuse guarantees the decrease or loss of productivity, morale, and creativity.

Abuse in the workplace can also cause long term psychological damage; both to the targets of the abuse, as well as those witnessing the abuse. In some jurisdictions, workplace bullying is considered an occupational health and safety hazard. The failure to provide a psychologically safe workplace may breach the employer’s duty of care towards their employees.

Risks from workplace abuse can include:

As with domestic violence, certain situations can carry more risk than others:

Abusers tend to be risk-takers. When cornered, they can resort to dangerous actions. In domestic violence, the victim is at most physical risk when they decide to leave their abusive partner.

The Cycle of Abuse 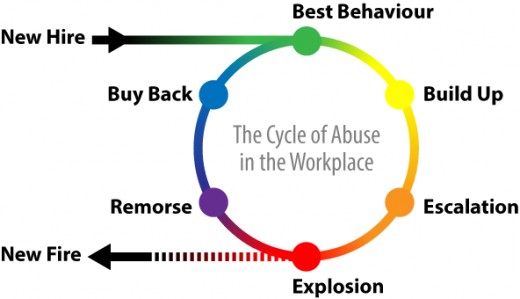 Awareness is the key to change. Being vigilant for uncharacteristic or sudden changes in behaviour and morale, especially after a new hire arrives, is your early warning system.

The Cycle of Abuse (also called the Cycle of Violence) is a framework commonly used to describe domestic violence and child abuse. I have adapted it here for the workplace. It provides an overview of all the phases in an abusive relationship, and describes the key behaviours to look out for.

It is important to note that we are looking for a pattern of behaviours, rather than point to specific isolated behaviours which may be just that – isolated, one-off behaviours.

This post is intended as an overview only. Please seek professional help if you need it.

Preventing an abuser from entering your organisation is always better than trying to remove one. Ideally the recruitment process will be able to identify and prevent disruptive personalities from coming into the organisation.

Unfortunately many abusers are excellent manipulators. They can present as charismatic, charming and “perfect” for the role. They are able to convincingly explain away any oddities in their work history.

When an abuser first arrives in an organisation (or when they are moving on from the Buy Back phase) they will be on their best behaviour.

In domestic violence, the best behaviour phase is also known as the Honeymoon Phase. During this phase, the abuser works to ensure guards are lowered, and to convince everyone that all is well.

If the abuser is new to the group, you won't have a personality baseline to compare with obviously. And every new hire would naturally be on their best behaviour. If a new hire is an abuser, this is the time when they will be selecting their target.

As time passes and everything is peaceful and good, the abuser will start their bullying and anti-social behaviours.

This can be casual little snide remarks about the target to begin with. Over time this will start to build up to more and more aggressive actions.

At the same time, the abuser is also busy maintaining the “perfect employee” image for everyone else, and especially those recruited into their "in-group." These are the people who have only experienced the abuser as an extraordinarily nice person, and who voice their support without hesitation.

These opposing positions, and the lack of evidence of abuse, cause confusion and self-doubt for the target. They feel something is wrong when interacting with the abuser. The abuser may even tell the target: "you make me do this" or "it is all in your head."

As more time passes, the abusive behaviour will inevitably escalate.

The cool, calm and in-control veneer of the abuser starts to crack as they become increasingly aggressive towards the target. Acts of bullying become more obvious and occasionally public. The abuser will be triggered more and more often.

Some of the abuser's "in-group" may voice doubts about the abuser. The target, and witnesses to the abuse, are visibly shaken after each encounter.

The explosion phase is the culmination of the build-up and escalation.

Following a trigger, the abuser reacts with extreme outbursts like throwing objects, destroying property, punching walls, and even physical attacks on the target. The abuser is no longer concerned with other people witnessing their behaviour, even the people from their in-group.

Sometimes the explosion phase will trigger the organisation to fire the abuser.

Unfortunately, many abusers seem to ride off the willingness of people to give them the benefit of the doubt, and are able to manipulate the situation so they don’t get immediately ejected from the organisation.

Not everyone who has an angry outburst at work is an abusive person of course. You need to determine whether there is a pattern. Extreme emotions like anger can indicated deeper issues. You may want to arrange counselling and other assistance for those involved.

After the explosion, the abuser moves into the remorse phase. This doesn't mean they are necessarily sorry for their behaviour. They may be more sorry that they have been caught out.

They can genuinely believe that their explosion was “just a misunderstanding.” And now that they have “let it out,” no real damage was done and everything can just return to normal.

This belief can make their remorse appear more genuine.

To return the situation to the status quo, the abuser leverages their charisma and charm to make amends and buy back favour.

Many of us are conflict-avoidant, and all too willing to give others another chance. We also tend to forget traumatic incidents quickly. These factors make the abuser’s buy back job easier.

There is unfortunately no single, sure-fire way to determine whether abuse is occurring in your business. This is one reason why breaking the cycle is so hard. It can take time, and even multiple attempts:

No one deserves to be abused. Yet most of us are not equipped to handle difficult abuse situations.

You don’t have to deal with this alone.

As a business leader, you should seek qualified professional help if you suspect workplace bullying is happening. It is your moral if not legal duty to look after your people as well as your organisation.

If you are the target of a workplace bully, you don’t have to suffer in silence. You are not responsible for the bully's actions. You cannot "make" them do anything.

If you believe you are in imminent risk, tell someone right now. Report it to the authority if necessary.

Seek help from your employee assistance program (EAP) which often includes the services of a psychologist or counsellor. Depending on your situation, using an external professional this way can be more approachable than your manager or HR department.

Abuse has no place in our society, or the workplace. We can all work together to stamp it out.