On the continuum of Do and Think

Factories hire C. Unthinking doing (C) is useful and effective only when the environment is tightly controlled and not subject to frequent or disruptive change. 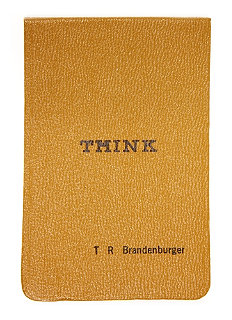 IBM’s founder Thomas J. Watson knew back in the 1930s that thinking was the way forward. The THINK trademark was filed by IBM 14 years before the trademark for its own name!

A biographical article in 1940 noted that "This word is on the most conspicuous wall of every room in every IBM building. Each employee carries a THINK notebook in which to record inspirations. The company stationery, matches, scratch pads all bear the inscription, THINK. A monthly magazine called 'Think' is distributed to the employees."

Change is more frequent and disruptive today. So it would make sense to think that businesses would benefit from hiring more (B)s than (A)s. (B) has a wider range in the continuum which makes them more adaptive. They can focus on doing more or thinking more to suit the situation.

Are businesses still primarily hiring for (A) though? A quick glance at the job ads seems to indicate so. Even with the roles one would associate with more thinking – such as board members and CEOs – still demand experience that can only arise from primarily functional doing.

I think businesses are still having a hard time quantifying (and thus valuing) the higher level skills like critical thinking and emotional intelligence. They can’t separate the process (thinking) with the content (doing; knowledge of a particular subject matter domain, or a specific tool.)

Instead of assessing how long a candidate has been in a specific role, how similar that role is to your opening, or what specific tool they used; businesses could focus more on understanding each candidate’s ability to think, grasp of the core concepts of the job, ability to stay calm in a crisis, absorb new concepts, and leverage their skills.

Job-specific tools and execution skills can be taught. The ability to think and solve problems, to learn and apply knowledge – much harder to teach.

If I fundamentally understand HTML, it doesn’t matter whether I use Dreamweaver, Notepad or Word to write it. Yet I still see job ads specifically wanting Dreamweaver expertise.