I use the word stupid here in its original meaning. I am referring to design solutions that, no matter how you rationalise or understand the process, are just … stupid. 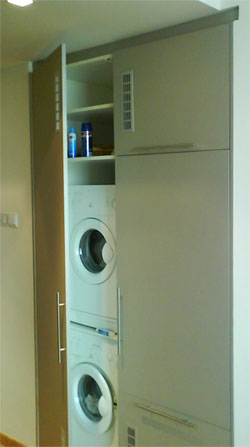 My laundry – essentially a dryer and a washer – is built neatly inside a tiny cabinet in my kitchen. Once opened, the door can be tucked neatly inside the cabinet cavity. A great space saving design without a doubt.

Stupid: The exhaust of the dryer is positioned less than a metre away from the domestic-interior-grade power points.

Why wasn’t the dryer ducted to vent to the outside? Or at least ducted through into the bathroom which is on the other side of the back wall? I would have thought bathroom fittings have a better chance of dealing with moisture than any other part of the apartment.

Here are some speculations as to why:

It doesn’t stop at the laundry either. I have a range hood. 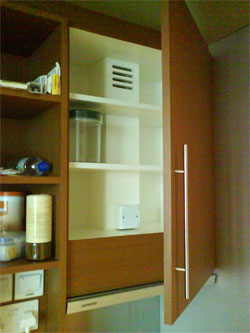 And here’s the catch: the wall to the right of the range hood is an exterior wall. The range hood could have exhausted directed outside, had anyone thought this through. Another alternative would have been to have the range hood exhaust directly into the kitchen. That would have made a little more sense than the existing setup.

With so many building projects going on in Singapore right now, I can’t help but wonder how many other stupid decisions are being realised right now.

Filed under: Craftsmanship, Design
Subscribe to my RSS feed