Hardware is going to be interesting again

This interactive LED coffee table looks fun! And it got me thinking about computer hardware.

There seems to be a recent increase in interesting computing-related hardware: tablet PCs, multitouch screens on phones, and Microsoft’s concept tabletop "Surface" PC.

We human creatures like to interact with our surroundings. We want to affect change, to make our mark; in large (cities) and small (graffiti) ways. Touch technology looks like making technology interesting again to interact with.

Let’s face it; input devices have been pretty limited and boring to date. We have mainly had buttons, rolling wheels, and rolling balls (using a LED or laser instead of an actual ball is still promulgating this rolling ball concept). Laptops have more recently brought us touchpads (slide/stroke) and trackpoints (finger-push/pull). Pen-based devices like graphics tablets and tablet PCs are still not widely used.

With cameras, microphones, fingerprint readers and accelerometers making their way into more computers, it is only a matter of time before we see new fun ways of using these hardware bits…

This Scope breath testing microsite uses the built-in microphone on many PCs in a fun and different way.

Spore is a game from EA that uses the accelerometer in the iPhone much like a Wii controller.

If you own a recent Thinkpad laptop, you can download games that use its built-in accelerometer as the interaction device.

Synaptics, the manufacturer of TouchPads installed on many laptops, offers a set of fun utilities that turn your TouchPad into an electric drum amongst other things. 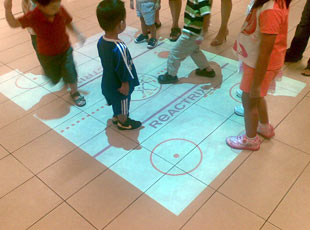 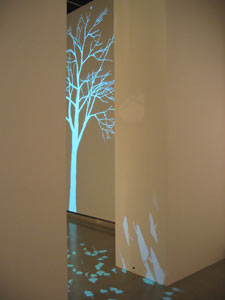 An exhibit in the London Design Museum (2005) with projected fallen leaves which swirled realistically as you moved through them.