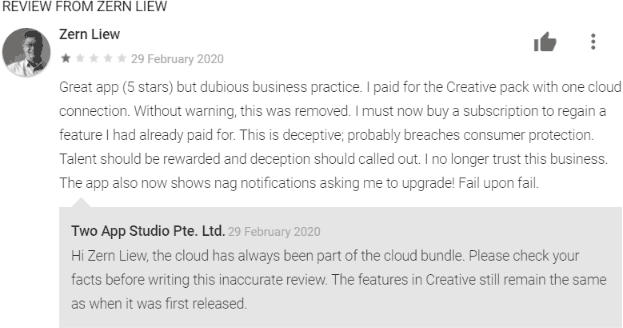 A business can take years to build up trust from its customers. A failure to empathise with customers and taking an adversarial position to customer service can destroy that trust instantly.

Is it really that hard to put yourself in your customer’s shoes?

In early 2019, I bought a great professional text editor for my Android phone called JotterPad. It was a one-off perpetual license. The app is well designed and well built. It was slightly more expensive than other editors, but good design is worth paying for. It had all the features I needed, plus a couple of great ones I didn’t know I needed (back and forth cursor control keys.) The licence allowed me to connect to a single cloud account. Perfect.

And it was. For almost a year. It really is a great product.

So I uninstalled and reinstalled the app, checked the online help, confirmed that I had purchased the Creative licence, and that the licence was acknowledged by the app. I had no satisfaction so I emailed their support.

And then, I found this report on Android Police: Excellent writing app JotterPad switches to subscriptions for cloud sync, ignores users who paid for one-time unlock.

JotterPad changed its model without alerting existing users. It removed the single-account cloud sync perk from the Creative pack and now requires the $29.99 Pro Cloud subscription to sync one or many accounts. No pop-up in the app, no warning upon uninstalling or reinstalling it, no email sent to buyers, no post on the company's blog, nothing. Zero communication.

How would you feel if you were a paid-up customer?

Whoah! Talk about rude! Talk about bait-and-switch deceptive! This is possibly a breach of Google’s Developer Policy on Deceptive Behaviours. More seriously, this may also breach Australian Consumer Law.
I support good design and good coding. I believe those who do good work should be rewarded. At the same time, I also believe in calling out deceptive behaviours such as this.

I found reviews on the Google Play Store calling them out on this behaviour. They dug themselves in with stunningly emotionally-unsophisticated responses. At best, there were short pat dismissive responses. At worst, they resorted to directly accusing me of not having my facts right (see image above.) Personal attack and gaslighting! They went there.

They broke their contract with their customers, kept quiet about it, and when challenged, went out on direct personal attacks.

Yes, criticism is hard to take. And yes, you can choose to respond like a rational adult instead of a shamed child. At this point, I had written a couple of professional emails to them, explaining the situation and my dissatisfaction, and also acknowledging their good product.

When a customer takes time to write to you, why would you dismiss and attack them?

Empathy strengthens relationships. The lack of empathy, especially when manifested as adversarial behaviors, breaks them.

Great product notwithstanding, the developers have shot themselves in the foot. As more customers complain, they will probably continue to shoot themselves in the foot. Because they are unable or unwilling to empathise with their customers. They chose to be on the other side of the table from their customers. A defensive adversarial position, although understandable, is hardly conducive to building relationships.

Consequently, they have decimated any trust I have in their business. They could pull the same trick again down the line with some other feature. Or with another of their products. (Oh dear, as I was editing this post, the app threw up a notification nagging me to upgrade – fail upon fail.)

The really sad thing is, this is not a unique problem. There are better, more empathetic, ways to transition to a more profitable model (nothing wrong with profitable) without pissing off existing customers.

The emotional basics would be:

I believe this business could have handled this change far better than they had. Instead, they appear to have chosen all the unconstructive and alienating behaviors.

If you have been affected by this, consider leaving a review on their product page, flagging it with Google via the link on that page, or emailing them. Please be constructive and civil.

Read related posts in this series: