From Darkie to Darlie (but only in English) 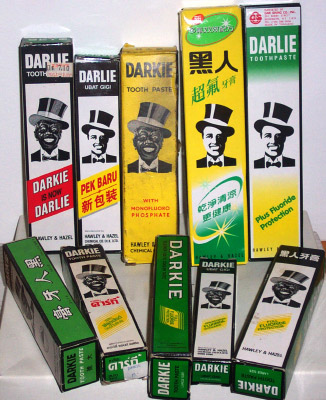 With social issues like racism, cultures vary in their sensitivity. What is considered a serious infraction in one culture may raise hardly a ripple in another. This is an interesting case in point.

“Hawley and Hazel marketed Darkie toothpaste as a parody of an American minstrel performer, Al Jolson, who became popular for his blackface performances.” – Wikipedia

After Colgate-Palmolive took over 50% of Hawley & Hazel in 1985, there was an outcry over the racist name and imagery. Colgate-Palmolive changed the name to Darlie in 1989, and replaced the minstrel performer face.

What many English-speaking customers may not know, is that the Chinese name remained unchanged.

Presumably, Chinese-speaking customers did not find the brand name racist. It can be argued that the Chinese name is more descriptive than derogatory. Given the origin of the English name and minstrel face, I would say the initial intent is dubious.

Of course, anyone can be racist; regardless of their race. In light of the recent Black Lives Matter protests worldwide, Colgate-Palmolive has announced a review on June 19, 2020. Let’s see how long it takes for the Chinese name to change, and for their Chinese-speaking customers to stop using the old name.