Why nice people do dreadful things

Our actions are founded on our beliefs. In day to day living we have learnt inhibitions that stop us from reacting blindly to stimuli. Our conscious mind and empathy for others enable us to consider consequences before acting. Most of the time.

I've been thinking about what would lead to someone doing terrible things. From mass shootings to passing socially regressive laws.

There are four factors. 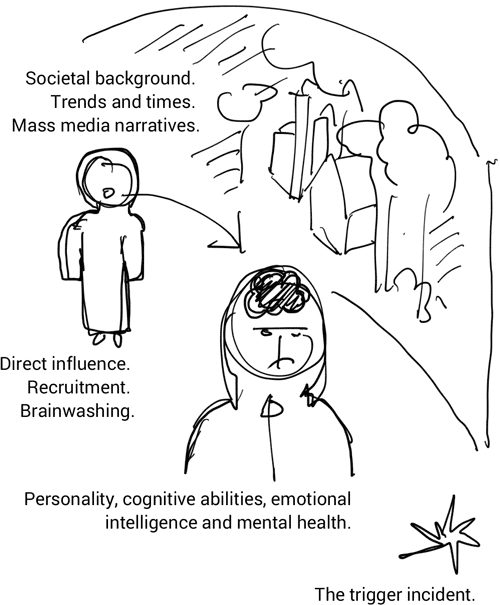 The background societal context sets the scene. It is inevitable that we absorb to varying degrees the prevailing beliefs of the society we live in. This includes civic society, and other communities we belong to like professional associations, political parties and religions.

Direct influence are people who Terry and cajole us into doing certain things or influencing our beliefs so we can be more like them. The religious leader telling his congregation to kill unbelievers. The party leader demonising refugees or single mothers to affect policy thinking.

The ability of individuals to think: to sort facts from fiction, to dot logical fallacies. Their emotional intelligence: to identify manipulating behaviours,  to empathise and appreciate differing viewpoints,  to stay emotionally strong and centred. Their mental health would of course affect these abilities as well as aid or hinder their healthy inhibitions.

The first three factors don't in and of themselves lead to drastic actions. A triggering incident is required to kick start the cascade of emotions and thoughts that will overwhelm an individual's inhibitions and cognitive defenses.

A triggering incident alone won't trigger anything without the right mix of fuel and oxidiser set out in the first three factors. Just like a fuse wire won't cause an explosion if it is not connected to a gunpowder keg.

The opposite with be true too. If the first three factors contain positive nurturing and compassionate material, a triggering incident will cause an individual to take constructive actions.

Filed under: Human Nature
Subscribe to my RSS feed