UX lies beyond just the screen 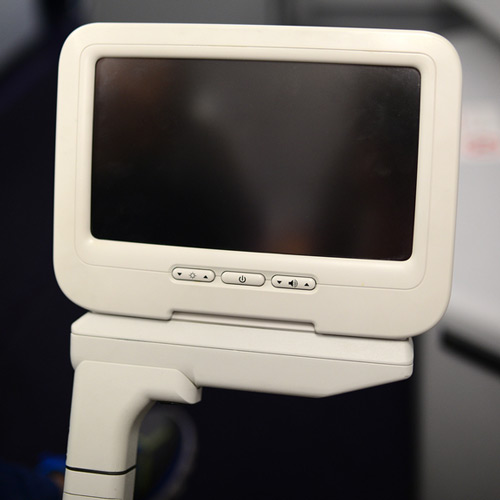 Moving between a brand new Airbus A380 and an elderly Boeing 777 in a single (long) journey, operated by the same airline, provided the perfect opportunity to experience the same inflight entertainment system in two different use contexts.

Naturally, the newer plane was the better overall experience. The screen was light and easy to handle, and the touchscreen worked perfectly. The application was clearly being experienced through its intended optimal hardware.

In contrast, the screen assembly in the 777 was bulky and stiff to handle, and the viewing angle was noticeably poorer. To make matters worse, the audio wiring in the armrest seem to be past its used-by date, as I had to lean on the armrest in a particular spot to get audio above a whisper. More loose wiring in the seat kept triggering the on screen pop-up menu during movies (unless i sat absolutely still with more of my weight on only one side of the seat.) The mouse pointer would also appear and march resolutely across the screen from right to left, registering taps as it went along, and slowing everything down to a crawl.

The two experiences of the exact same user interface: chalk and cheese.

There is obviously no way the designers could've dealt with faulty hardware of course (or is there?) The lesson here is that the sum total user experience of an app is (a) more than what is happening on the screen itself, and (b) must take into account the context/situation where it is experienced.

When we design an app we we tend to focus on the screen; our prototypes end at the screen boundaries. But we do need to be aware of the wider context of where the ago will be used!

A parallel in graphic design is when designers who are used to think in flat, rectangular pages forget to check the context of their work, which can have hilarious results like this and this.