I was excited by the title of this AdWeek post Infographic: See Which Devices Your Target Audience Is Using but was most dismayed to find that I cannot actually read the infographic! The commenters seem to agree.

The first obvious (and sadly common) fail is the legibility fail of using white text on a pale blue background. This sort of mechanical fault should not happen at all outside of first-year graphic design. Some of the circles have thin white outlines too. Can you see which ones? Does the designer not have eyes? 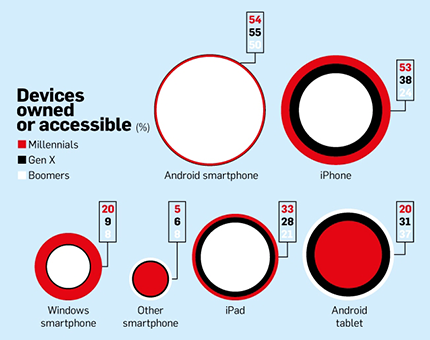 Pie charts should have been used instead of the concentric circles. These circles do not convey any sense of relative amounts. If I am reading these right (and I may not be!) it looks like Android smartphones are used predominantly by Boomers. The sizes of the circles and rings have no immediately discernible meaning.

The numbers also don't make sense presented this way. The little stacks of numbers don't add up to 100. The numbers for each of the three demographic groups don't add up to 100 either?!! It is almost like the designer grabbed a bunch of numbers and made circles out of them without any real understanding of the information.  If you don't know it, you cannot hope to explain it. Where is the editor in this?

There is also this tendency for designers to reinvent the wheel because (I myself have been guilty of this!) "Normal" pie charts and bar graphs work. And where appropriate, where they would be optimal in communicating, they should be used. 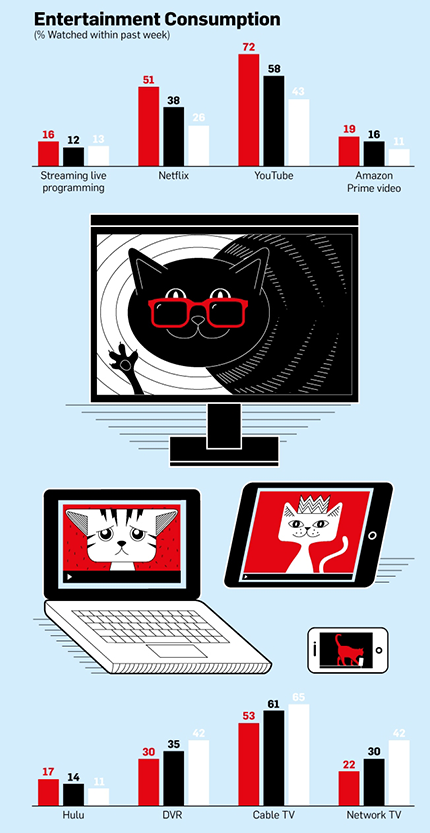 The bar charts here help with visual comparisons. Using what works! Again I am not immediate clear as to how the percentages work. I'm sure if I invested the time to think through this I will figure things out. But that would defeat the purpose of an infographic!

I am also confused by the cats on devices. They are cute. But do the colours signify some sort of comparative information? Or is this just gratuitous illustrations to "dress up" the infographic? If so, the designer has completely failed to understand the point of an infographic. The hard part is to make things succinct. The easy part is to add gratuitous decorations.

I think we tend to confuse graphic design, illustrations and infographics. Just because a piece of work comes out of Adobe Illustrator does not make it an infographic. We are also unclear about the use-context. Is it as an illustion to support a piece of written work? Is it instructional? Informational? Directive? Decorative? An experienced graphic designer will be able to identify, switch to, and maintain focus on the appropriate context when doing the work. Clearly this has not been the case. As always, more clear thinking in design would be helpful - both to the profession itself, as well as for the end users.

We should not have to scratch our heads and try and work out how to read an infographic!

Filed under: Communications, Design
Subscribe to my RSS feed