When Apple calls their new iPad "4G LTE" when it can't operate as a 4G device at all outside of five networks in the US and Canada. 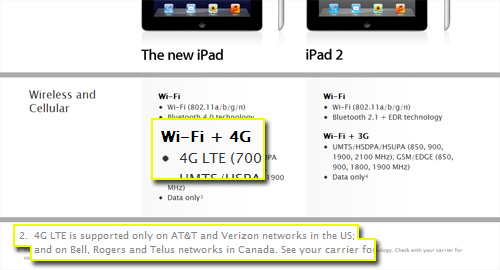 From the Apple website (screengrab above), The 4G moniker was clearly used as a means to differentiate the "new" iPad from the iPad 2. And is presented as a marked improvement over the 3G on the latter. And an improvement it would have been too if it were actually the case - which it isn't in Australia and presumably every other country outside of the US and Canada.

I think this is highly suspect. As does this Sydney Morning Herald article.

Car ads often display a disclaimer "Overseas model shown" to indicate that the vehicle shown may have stylistic differences to the locally available model. But in the case of the "new" iPad, 4G is not some stylistic difference that did not matter much in the greater functionality of the product, but a significant feature that could potentially sway customers either way. Imagine a car being called X-V8, advertised as having a V8 engine, but sold with a V4 engine in most markets. Fineprint notwithstanding, this surely has to be suspect from an ethical advertising viewpoint. A significant number of poll respondents on the Sydney Morning Herald article linked above seem to think so.

Some examples of conduct that may be misleading or deceptive are: a mobile phone provider signing you up to a contract without telling you that there is no coverage in your region...