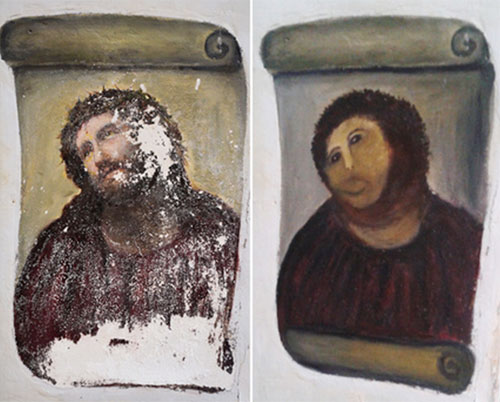 Many of us would have come across this cringe-inducing Mr Bean-esque news item by now: “an octogenarian neighbor of the church, who, noticing the damage to the painting, took it upon herself to restore the painting "with good intentions" but "without asking permission,"” -- full article here. (Thanks Ye!)

What I want to know is – why didn’t she stop as soon as she realised her, um, lack of ability?

The “restoration” look like it would have taken more than a few minutes. At which point did she realise it was not going well? And when she did, what compelled her to continue? And what made her stop at the end?

Why was she unable to project the likely outcome after the first few strokes?

We see similar behaviour in other aspects of life. We ignore glaring character flaws upon character flaws, and suddenly one day realised we had gone into business (or a personal relationship) with a complete psychopath. Business make marketing blunders, only to heap further, compounding, and foreseeable mistakes on top of that first one. In some situations, we just seem somehow compelled to make matters worse.

Individuals do this just as spectacularly as committees. Do committees amplified these behaviours? Or temper them?

The contributing and compounding factors could be:

Can you think of any others?

Here's a video of the "incident":

And here’s one of Mr Bean with Whistler’s Mother:

Filed under: Craftsmanship, Human Nature
Subscribe to my RSS feed