If you want to look cool and use the letter X in your name/logo, please don't make it look like a bandaid; especially not a bandaid applied on the side of a plane. 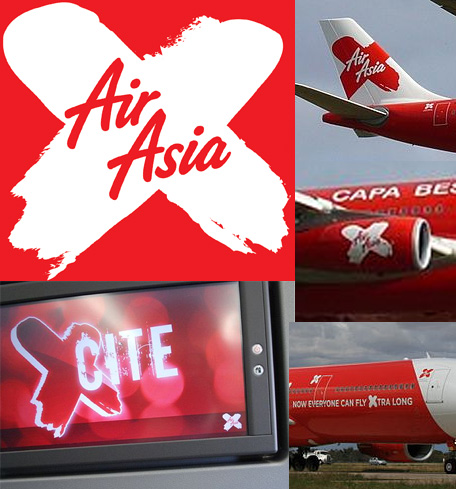 I noticed this in a newspaper article about Air Asia X cancelling their Europe routes recently. My first thought was the newspaper’s graphic artist crossed out the logos to indicate “cancelled.”

Then I realised it looked like a big fat cartoon bandage. As you can see from the picture above, it does not work applied to just about anywhere. On the engine and the tail, the X looks like a bandage. Next to the doors, they seem to say “do not use this door”. On the in-flight entertainment system the big logo and “CITE” does not read as a single element; and the smaller logo just looks like the “click to close” symbol.

Clearly no one considered alternate readings of this mark, or the different contexts in which it will appear.

Thinner, less blobby, formally straight strikes would have worked. Like the X in Xerox' old logo.

The brush stroke style is less formal and friendlier. But when used to express a cross it says hurriedly, manually, "crossed out"; rather than a friendly X.

Filed under: Design, Differentiation
Subscribe to my RSS feed