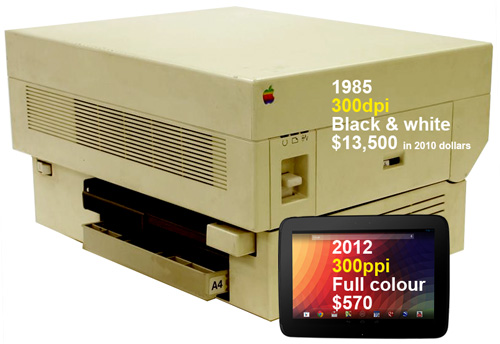 When Apple introduced its first laser printer - the Laserwriter - in 1985, it kickstarted the desktop publishing revolution. At a time when most dot matrix printers hovered around 144dpi, the 300dpi (dots per inch) resolution of the Laserwriter made individual dots that make up each page just about invisible to the human eye - resulting in smooth curves and sharp hairlines.

We reached another 300 milestone with Google's latest Nexus 10 tablet. It sports a 2560-by-1600, 300ppi (pixels per inch) full colour display. I am curious to see one for real, to see hard hard it is to make out the individual pixels.

I for one am amazed this happened so quickly. We have come a long way in 27 years!

Laserwriter image from museumvictoria.com.au Nexus 10 image from Google Play Store. Prices shown are for illustration only and are in AUD. And oh yes, the iPad's Retina Display runs at 264ppi.