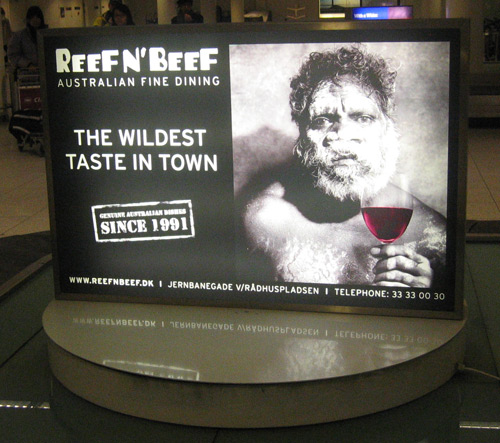 This example of marketers and advertisers misappropriating a foreign culture for shallow ends greeted me when I was collecting my luggage at Copenhagen airport recently.

I find this rather distasteful: alcohol abuse is a significant social problem within the Australian aboriginal community.

In a conversation with Danish wayfinding expert Nicolai Okkels in the same airport a few days later, Häagen-Dazs and Nørdic Mist came up as similar examples of inane advertising/branding gimmicks that does nothing more lampoon a culture/language and insult the intelligence of consumers.

The name Häagen-Dazs (a US company) is a made-up word spelt in a way that is practically unpronounceable (Wikipedia). Coca Cola’s soft drink Nørdic Mist packs a double whammy – Nørdic is pronounced Nerdic in Danish and Norwegian, and Mist is a German slang for “crap” (Wikipedia).

The whole concept that is “foreign branding” may be cute a few decades ago, but in today’s globalised world, it just demonstrate laziness and a lack of authenticity on the part of the marketers/advertisers.

Filed under: Authenticity, Communications, Marketing
Subscribe to my RSS feed