When "sellers" think they are more important 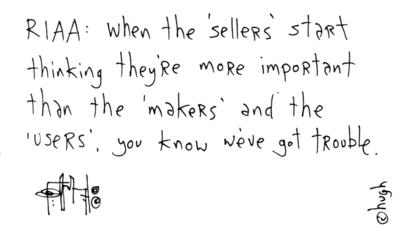 Only last week I was reminded of a less-than-satisfactory collaborative project I was involved with many years ago.

There were two of us: I was the "maker", and the other person was the "seller". We recognised the need for each other's roles, and came together to develop a product.

The agreement we had was equal everything - effort, costs and profits. I have always liked this approach because it respects the input of all parties equally, and removes the unproductive haggling/mulling over whose time or effort is worth more.

The problem was, the other party secretly believed that their input as seller was worth more. But they were not upfront with me about this until after we had both invested money into the production, and were poised to launch the product.

Only then was I told that they were not happy sharing the profits from sales with me as per our agreement - because they had worked really hard to get to a position where they knew the right people to sell the product to, because they could have easily paid some other maker to do what I did, and what a great favour they were doing for me by simply letting me work with them on this project!

And so the product died a quick death. There was no way I was going to have anything more to do with this person; not even with the possible promise of future earnings. A breach of trust at this level was not recoverable. Sure, suing for breach of contract was an option, but it would have been throwing good money after bad.

Not being upfront and truthful was the problem. (I still can't believe this person deliberately manipulated the situation for their personal gain; but rather they genuinely valued their input more, but were unable to say so until the money was in front of them.)

I know my passion lies in creating and making stuff, and not in selling. So I do value people who can sell (market, PR) well. So why is it that some many "sellers" think they are worth way more than the "makers"? This certainly seems to be the experience of many fellow "makers" like musicians, authors and artists. Is this really justified? Or a case of marketing/PR types believing their own spin about how indispensable they are?