The case of the entombed air conditioner

The first comment on my post Stupid design – two ludicrous examples on stupid design decisions in apartments reminded me of this shockingly bad Sydney apartment I had the pleasure of living in a few years ago.

It was a brand new apartment. I was the first person to move in. And the first one to use the air conditioner. Within an hour of turning it on one hot summer's day, it flooded the bathroom ceiling and shorted out the power. Water bubbled the paint in the walls and filled the light fitting.

When the builders came to fix it (it was under warranty), they discovered that the whole compressor unit was entombed in the bathroom ceiling. So the whole bloody ceiling had to come down to access the unit. This is what I ended up living with, on and off, for almost three months: 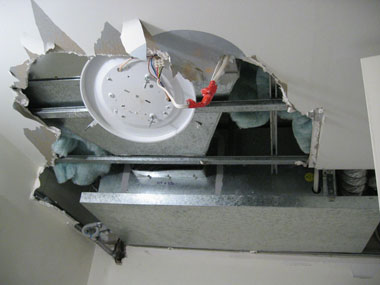 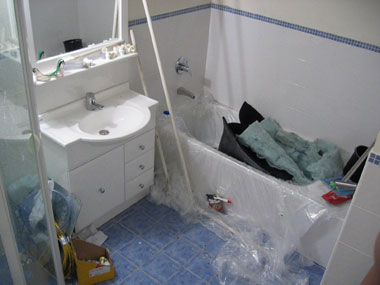 They attempted several fixes. Each time, most of the ceiling had to be knocked down and re-plastered after a supposed fix. The laundry was affected as well. Incidentally, there was no usable lighting in the bathroom during the times when the ceiling was off; I had to rig a lamp to take these photos.

At the end of this whole exercise, there was substantial workman damage to the new carpet, bath, sink, vanity, and laundry fittings. You just cannot do this level of demolition work without damage.

They finally managed to fix the water leakage problem. Only to discover that in the process, they broke the heating function (it started off as a reverse cycle unit). I refused to let them take the ceiling down a forth time to attempt yet another fix.

Sad to say, the builders were a largish company too, with multiple significant properties throughout Sydney. I wonder what the cost savings to them were to entomb the air conditioner this way?

Filed under: Design, Ethics, Technology
Subscribe to my RSS feed