Why I won’t buy Apple (ever again) 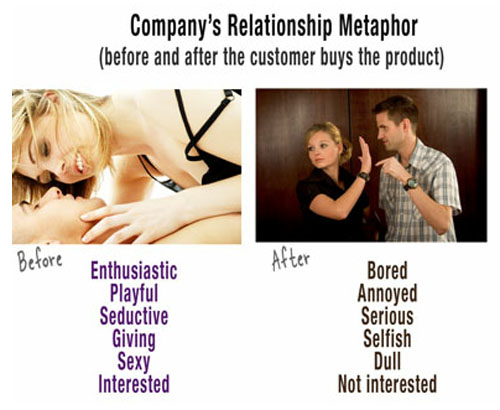 The great pictures on this Creating Passionate Users blog post: Too many companies are like bad marriages reminded me powerfully of my personal experience with Apple years ago (my version of their pics above).

I started my business on a Mac Powerbook G3 in 1998. It was easily twice the price of a comparable Dell. Plus several thousand dollars of software. As a total sucker for the Apple cult then, me and my Mac was going to change the world! Boy was I in for a MAJOR disappointment:

So what happened then?

A wonderful friend loaned me her spare old Thinkpad with WindowsNT so I can avoid starvation. (I had to spend more money purchasing Windows versions of all my software.)

Oh my gawd – this Windows thing works! WindowsNT ran Photoshop and Office faster and with less RAM. It was days, not hours, before each reboot. The ancient Thinkpad battery lasted longer than the newer (and more expensive) Mac battery. The Thinkpad felt really solid and well-made, the screen hinge was tight, the keyboard did not scratch the screen…

I have never looked back since moving completely across to Windows. The whole Apple saga cost me months of lost sleep, heartache, embarrassment, and about $12,000. Thanks are indeed due to Apple for giving me the opportunity to try out the competition!

The moral of the story: When you have a customer’s love, they will be loyal purchasers and gracious forgivers. But only up to a point. When that love becomes hate due to your continual betrayals and negligence, when you take that love for granted, you will lose not only that customer, but also gain forever the negative word-of-mouth non-referrals and counter-evangelisation that customer will generate.

I have had the satisfaction of warning many people off Apple products. It comes down to not being held to random by one single incompetent supplier for both your hardware and OS, especially one that obviously does not give a damn after making the sale.